World Junior and Under 23 Championships 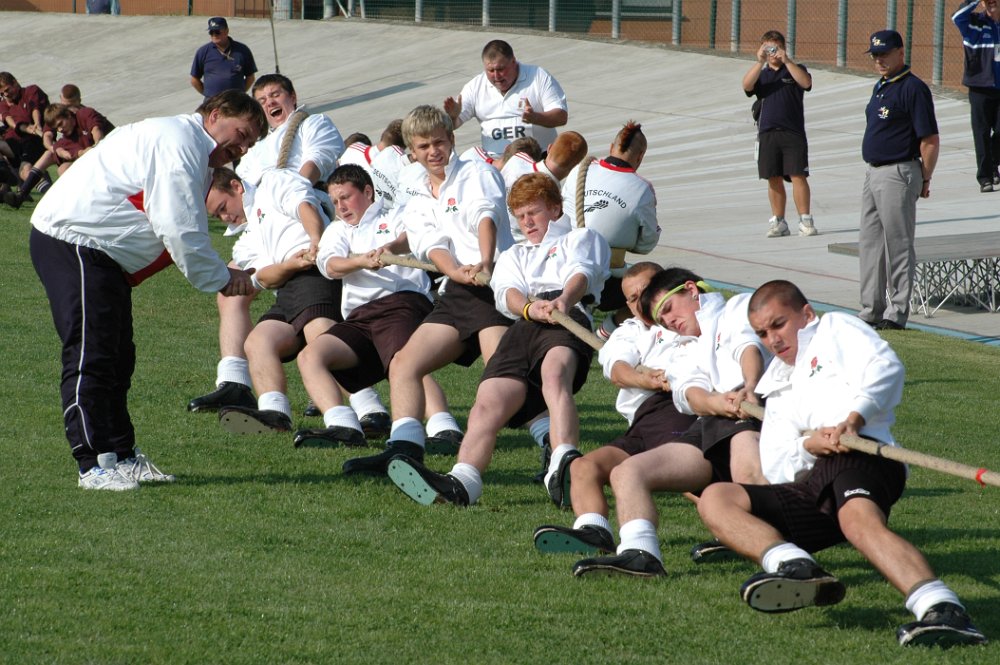 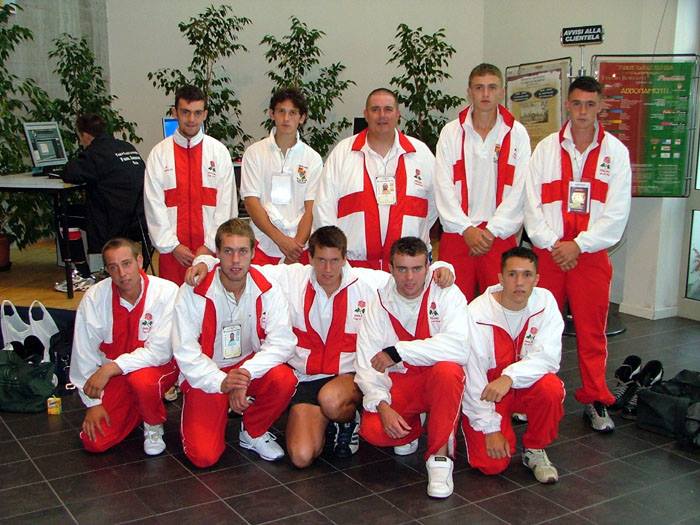 The under 23’s were represented by a squad of pullers, and again were up against a very tough field of competition. The squad started off against South Africa, with a 2 ends to 0 defeat, but in this TWIF rules competition went one end a piece with Germany in the second pull. The team defeated Sweden and Italy on the way, and came up against Switzerland, where the England team gave a good account of themselves on the first end but did not have enough to bring the Swiss over. The team carried on but went one end a piece with Holland and Lithuania, and were then defeated by Belgium to miss out on a place in the semi-finals. Photo: England under 23 squad made up of pullers from Congleton, Norton, Lincoln, Thames Valley, Sheen, Sandhurst, Oxney Vines Cross and Hanging Bridge 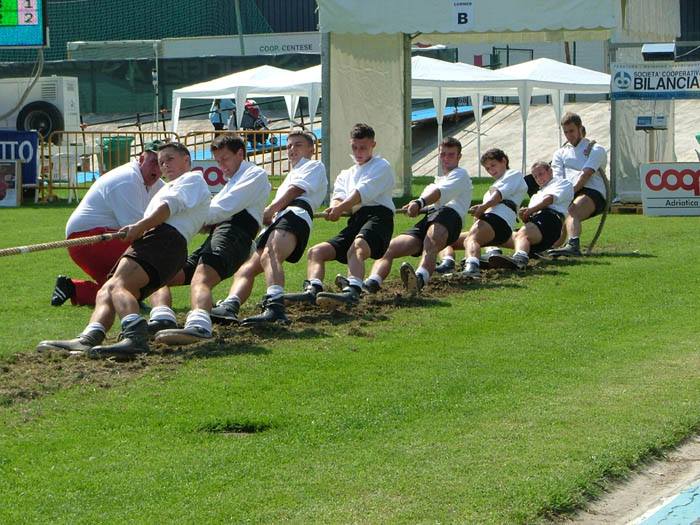 The final was won by Switzerland after defeating Germany 2-0 in the final, and Belgium defeated Latvia for the bronze medal, after Latvia had gone through the whole competition undefeated until the semi finals. Overall the England youth squad performed well in the youth tournaments, considering that it is the first time England has been represented in the youth weight classes since 2000. The lads in both squads learnt a lot from the experience, and hopefully the lessons learned can be built upon so that next years teams will be stronger. England under 23s in action 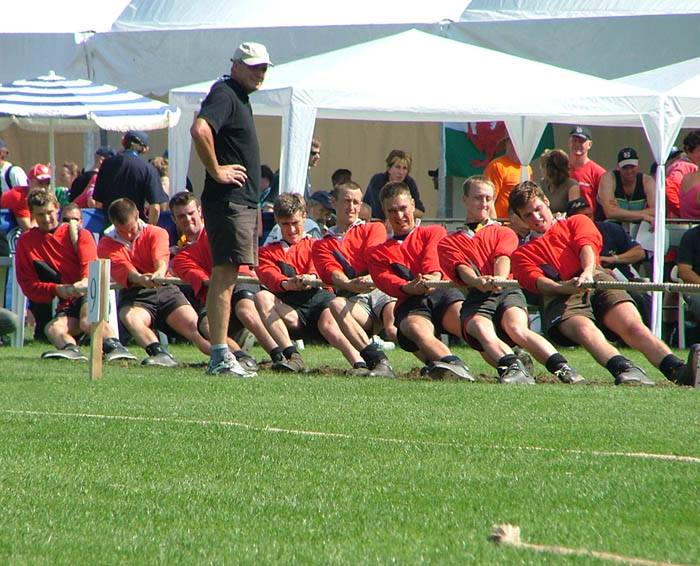 The mens 560 kilos saw England have 6 clubs entered into this weight category. Team Army, Sandhurst A and B, Norton, Oxney and Hanging Bridge all entered teams. The competition was split into 4 groups, with Norton, Sandhurst A and Oxney all progressing to the Quarter finals. Norton defeated Fam. Janssens from Belgium in their pull and Sandhurst defeated Ebersecken from Switzerland. Oxney had a real battle on their hands in their pull with TTV Veenseboys from Holland in their quarter final, but pulled extremely well to defeated the Dutchmen by 2 ends to 0. In the semi finals, Norton met Sandhurst and Oxney met Killylough from Ireland. Norton pulled extremely well to defeat Sandhurst two straight in the semi finals, and in the other semi final Oxney went out by 2 ends to 1, and it seemed that their quarter final pull before had taken a lot out of them. Photo: Oxney Vines Cross 560kg 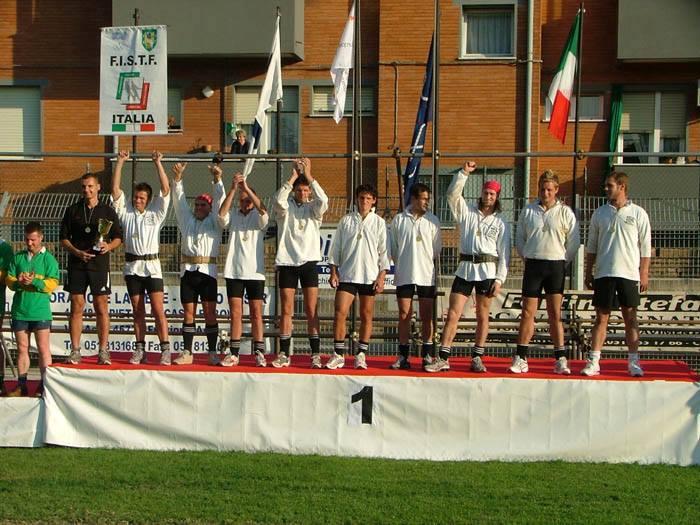 In the bronze pull off, Sandhurst had more left in the tank to defeat a brave Oxney team by two ends to 0, but nothing can be taken away from Oxney, who have made the top 4 four years running in international open club competitions and European and World Championships. In the final Norton were up against Irish team Killylough. Both of these teams are familiar with each other, having met at many international competitions whilst representing their respective countries. On this occasion, Norton were too strong for the Irish men and won in two good ends to take European gold. Photo: Norton on the podium 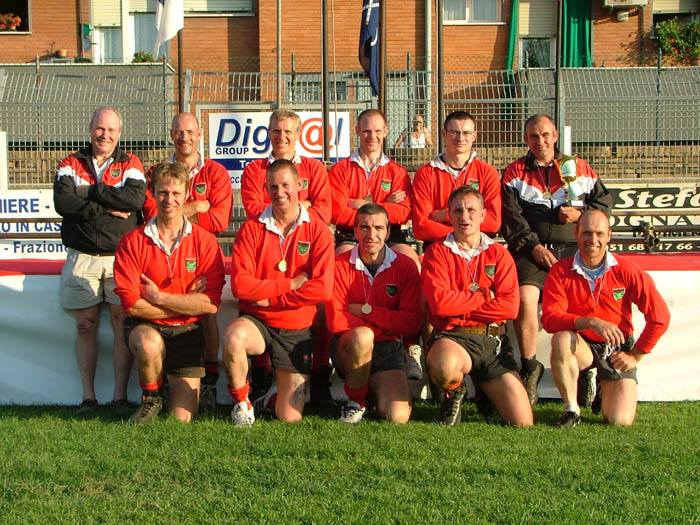 The 680 kilos competition saw 3 English sides enter. They were Felton, Bosley and Hanging Bridge. Felton won through their group without dropping an end and Bosley missed out on a place in the next round after having a 1-1 draw with Swiss side Sins, and so missed out on a place because they had one more caution. Hanging Bridge also had a tough competition, and although they were well under weight, they gave a good account of themselves. Felton were the only English side to progress, and they went all the way to the semi finals to meet Irish side Boley. Felton pulled very well on both ends to win through by 2 ends to 0 and went on to meet TTV Jagersrust from Holland in the final. Felton in the end proved to be too strong for Jagersrust and won the gold medal by 2 ends to 0 to secure a second English gold medal. Photo: Felton Eccles with their 680kg gold medals 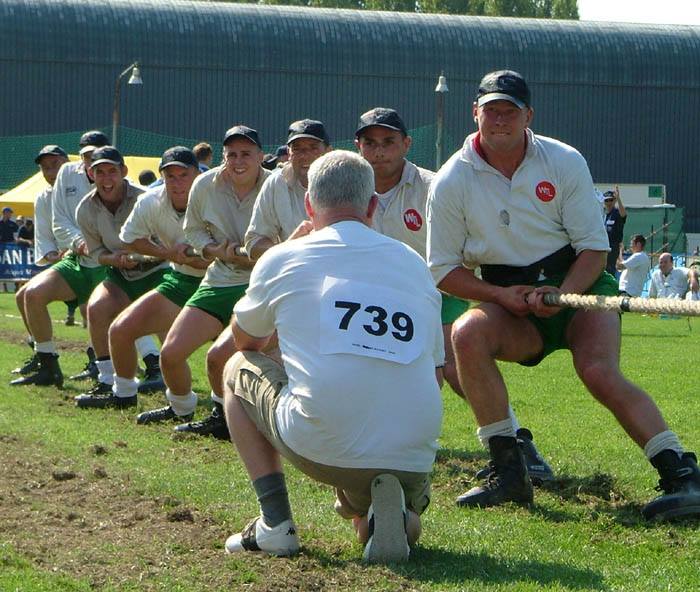 The only English side to enter the 720 kilos was Congleton. This competition was split into 2 halves. Congleton were drawn in the second half, along with defending champions from 2003 Velkonis from Latvia. Congleton had this side on their second pull and had them to within a foot of the line on the first end, only to stop and the Latvians turned things around and win through by 2 ends to 0. Congleton failed to make it through to the semi finals after being defeated by Toutje from Holland. Veloknis won the gold medal after defeating fellow Latvian team Ozoli in the final. Touwtje secured bronze after defeating Italian team Scorze. Photo: Bosley open 680kg team 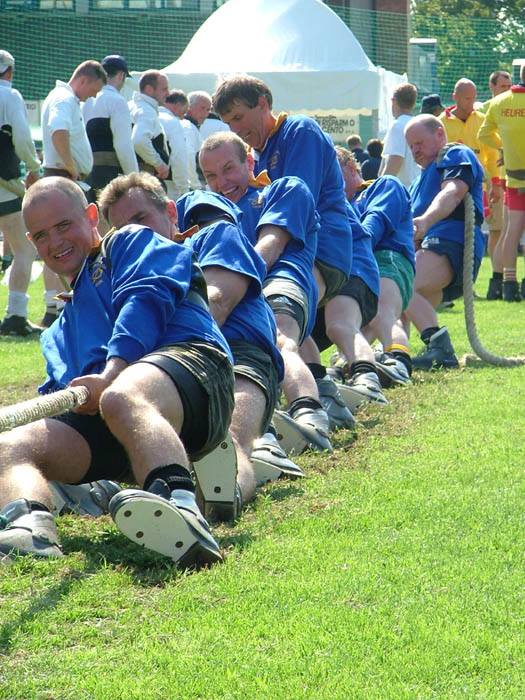 Felton Eccles, Hanging Bridge, Oxney, Team Army and Norton were the English sides that entered the 640 kilos competitions. Team Army missed out on place in the Quarter finals by 1 point, and Hanging Bridge missed out on a place in the Quarter finals after having Swiss side Engleberg in their group, along with TTV Heure, who both met each other again in the final. Norton, Felton and Oxney all made it through. Oxney went out in their pull and Norton and Felton met each other, only for Felton to defeat Norton by 2 ends to 0 to make it through. In the semi finals, Felton were defeated by Engleberg and TTV Heure defeated TTV Veenseboys. In the bronze pull off Felton pulled extremely well to defeat a strong Veenseboys side by two ends to 1. In the final, Engleberg pulled with fine control to secure gold by 2 ends to 0 against Heure from the Netherlands. Photo: Hanging Bridge in the mens 640kg competition 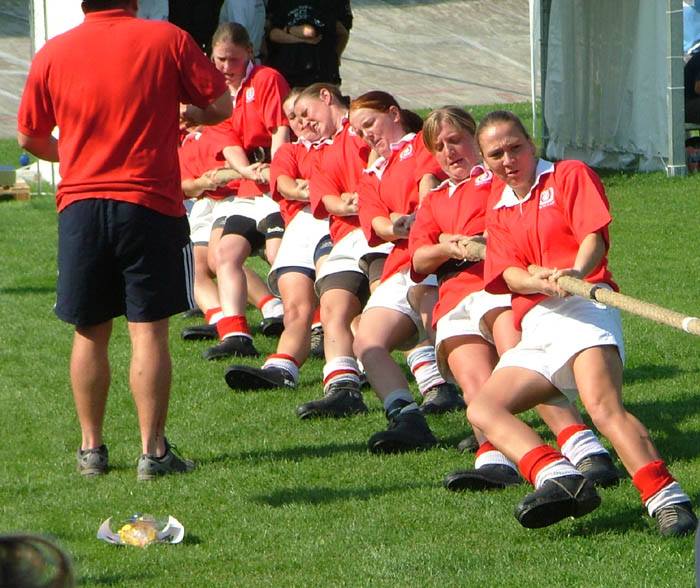 English clubs also entered the ladies weight classes. Team Army entered both weight categories, and Belvoir Vale entered the 560 competition and Bedford antered the 520 competition. All of these teams performed extremely well, but unfortunately failed to make it out of their respective groups. (Apologies for the lack of detail in the report for the ladies. If anyone can submit a detailed report, then you are more than welcome to send one in). Photo: Army ladies 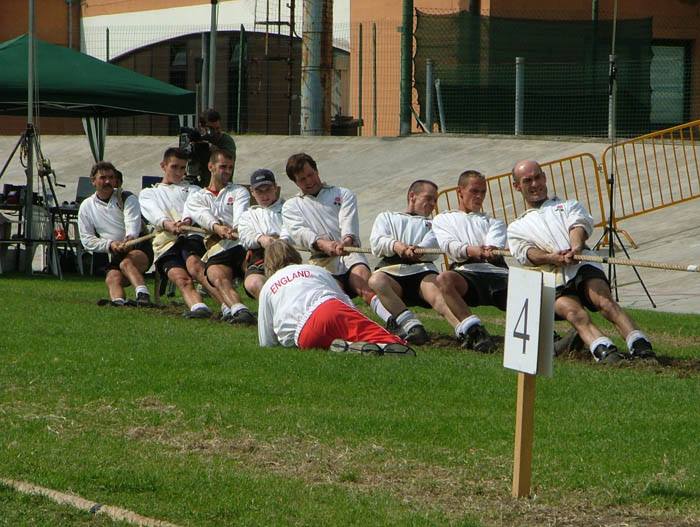 The international competitions started with the mens 560kg weight category England were represented by Sandhurst. England won this weight category at the last European Championships in 2003 and were represented by Norton. This time Sandhurst were hoping to add a European title to their world title, which they won in America last year. Sandhurst had a tough start against Switzerland, and after 2 ends the Swiss proved to be stronger and won by 2 ends to 0 but England did not let this worry them. England carried on and later made a substitution. England then battled through well against Ireland to a 1-1 draw, but still managed to finish the group in second place. In the semi finals, England were up against Northern Ireland and got through to the final by 2 ends to 0, whilst Switzerland defeated Ireland by 2 ends to 0. Ireland defeated Northern Ireland by 2 ends to 0 to secure bronze before England and Switzerland met in the final. It was a strong Switzerland side that England met in the final, and in the end they proved too strong for England on this occasion, winning the gold medal by 2 ends to 0. Photo: England 560kg team represented by Sandhurst 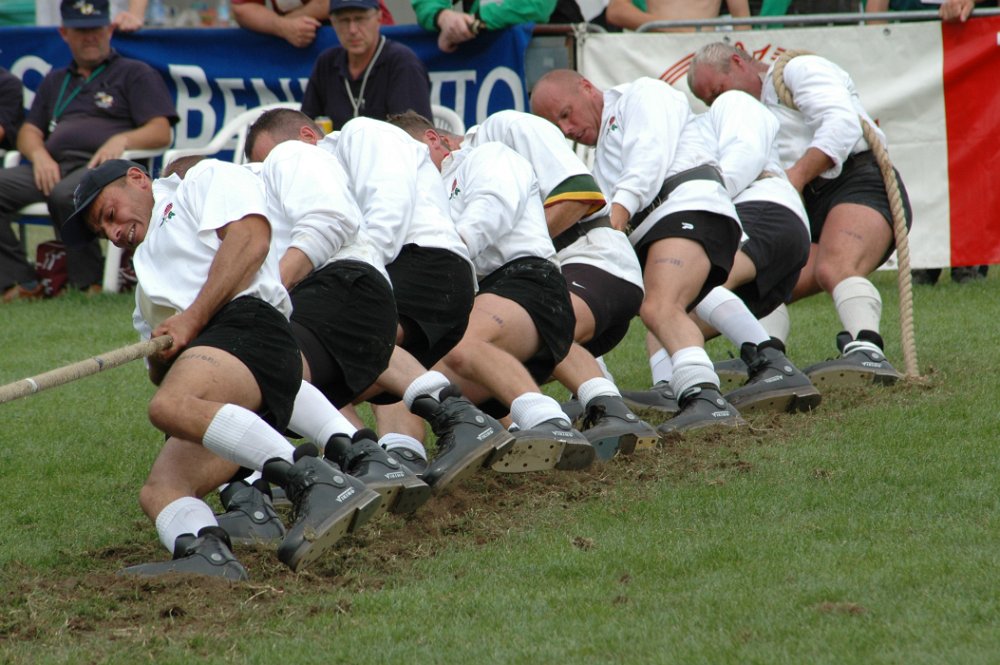 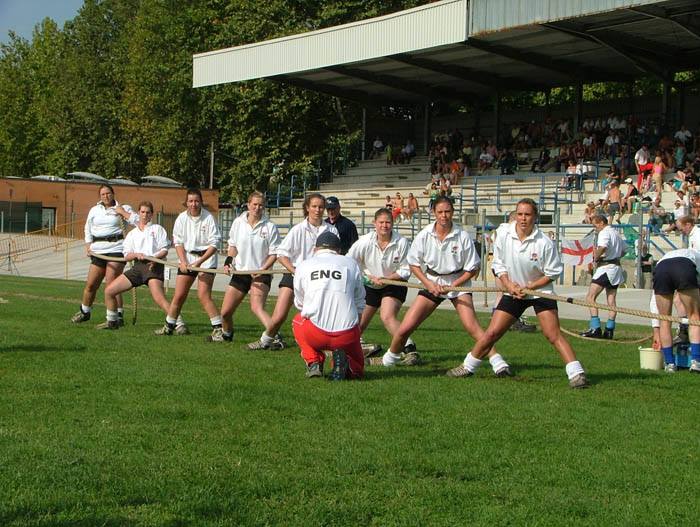 In the ladies 560 kilos England were represented by Belvoir Vale. Belvoir Vale won this weight at the national championships, but were still well under weight in this weight category. The team were level with Wales in 4th place coming into the last pull and this was the team they had to beat to make the last 4. In the end, the pull went to a 1-1 draw, and so the TWIF criteria had to be applied to see who would make the last 4. Unfortunately however, England had picked up one more caution than Wales and so missed out on a place in the last 4. Sweden won the gold medal defeating Switzerland in the final, and the Netherlands took third place. Photo: England ladies 560kg team represented by Belvoir Vale 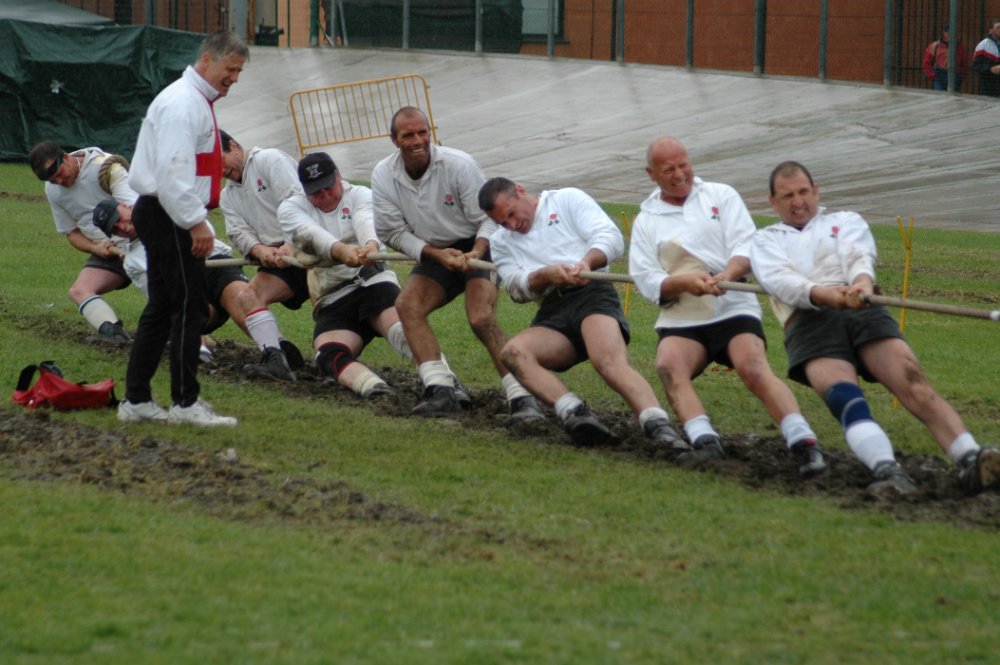 The second day of competition started with the men’s 720 kilos. England were represented by Congleton in this weight category and started off with a good 1-1 draw against Switzerland and then took out Latvia two straight. The team then were defeated by Ireland but Ireland faded in the competition, and England made it in 4th place to the semi finals. England were then defeated by Switzerland in their semi final, whilst the Netherlands were defeated by Sweden. England were then defeated by the Netherlands for the bronze medal, but the team were happy with the result as things had not been going well for the team leading up to these championships. The gold medal was won by Sweden, who dominated Switzerland in the final and won by 2 ends to 0. Photo: England 720kg team represented by Congleton 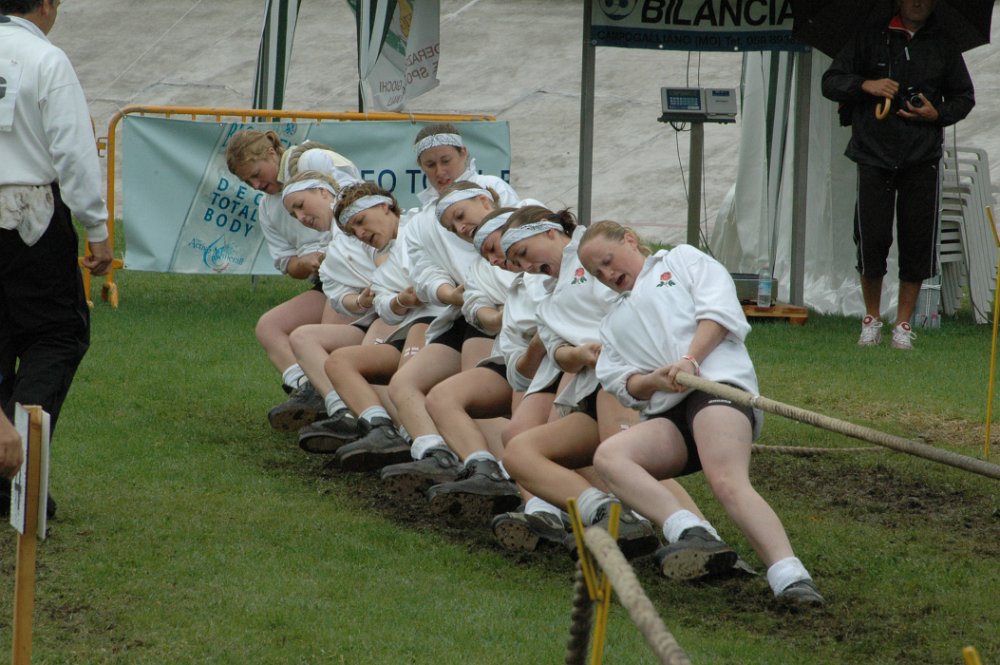 In the ladies 520 competition England were represented by Bedford. England got on to a good start, and were in the running for a place in the last 4. Like the England 560 team, they needed to win their final pull to get through. Their final pull was against Scotland, but the pull ended up at one end a piece, but Scotland had earlier taken an end out of Switzerland which gave England no chance of getting through. The gold medal was again won by Sweden, with Switzerland taking silver and Netherlands bronze. Photo: England ladies 520kg team represented by Bedford Ladies 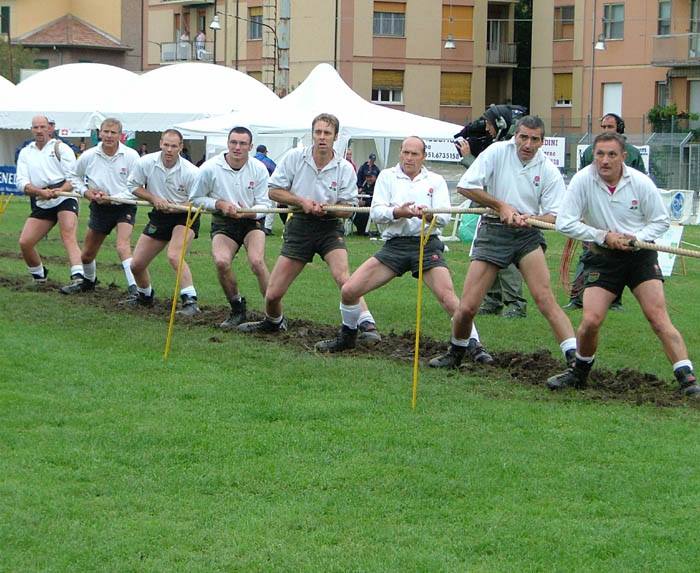 The final weight of the championships was the 640 kilos. England were represented by Felton Eccles. This weight was split into two groups. England were drawn into a group of 6, which contained Ireland and Sweden. England went through in second place having only lost to Ireland, and met Switzerland in the Semi final. Switzerland won by 2 ends to 0 to make the final. In the other semi final Ireland defeated Germany to set up an England – Germany bronze medal pull off. England took the first end, but unfortunately Germany turned it around and took the following two ends to secure bronze, to the disappointment of the English side. Switzerland won a good final against the republic of Ireland, who made Switzerland work really hard for the gold medal, with the first end lasting over 13 minutes, and the Irish team were unfortunate to pick up cautions on the first end. Switzerland then took 5 minutes to push out Ireland on the second end to secure gold. Photo: England 640kg team represented by Felton Eccles.